Why Irene Should Not Have Kittens 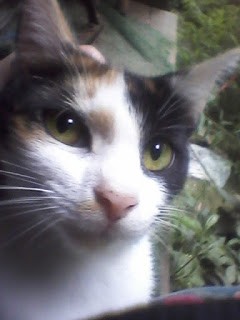 (Reclaimed from Bubblews, where most of this article appeared with thanks to &BeyondRoses for reminding me: http://www.bubblews.com/news/9232357-this-is-how-a-stray-looks .)

As regular readers know: Before my home became the Cat Sanctuary, I had all the resident cats spayed. Though I deeply regretted that Black Magic never had a real physical heir, at least back then it was cheap and simple to rescue cats from shelters...before the shelters gained monopolies and raised adoption fees to $150 for an alley cat, $400 for a dog that even looked like a fancy breed...

Then I spent more time in Washington and saw that Humane Society policies had come close to making cats extinct. (Many supporters of the Humane Society of the United States aren't aware that its current president has bragged, speaking of cats and dogs, "One more generation and they're out.") Free-range cats were no longer protecting the suburbs from rats, and even for those who promised to sterilize and confine cats they "adopted" from shelters, "adoption" had been made next to impossible for nice normal yuppie families.

So now the Cat Sanctuary policy is that we don't automatically sterilize cats. If they produce healthy kittens, even if the cats and kittens are not the very special Social Cat family in residence now, there are places where those kittens are needed . Places where the Humane Society shelters are selling stolen pets from rural areas, because there aren't enough local cats and dogs for the people who want to give them loving homes.

Well...regular readers may remember Irene, the sweet, docile, pretty-faced calico cat who shared a nest box and a combined family of ten kittens with Heather last spring. Irene and Heather were born in the same litter and have always behaved like the ideal pair of sisters.

Turns out, though, that they're not full sisters. When Irene gave birth to Manx-type kittens last year, I blamed a Manx tom who'd been in the neighborhood. When Irene gave birth to a kitten with Siamese-type color points and a Manx-type tail, I had to admit...Irene's tail is shorter than it should be. Irene's body shape is broader, with bigger haunches, than Heather's and Ivy's. Irene has the weak form of the Manx gene and, even if her mates are free from that gene, is likely to give birth to Manx-type kittens.

Which is very bad...because all of Irene's Manx-type kittens died young, for no obvious reason. (The Manx gene is considered a lethal gene, but supposedly if one cat has a complete tail the kittens have a chance to survive.) Some of Irene's kittens lived long enough to be adopted, this year, but then died after poisons were sprayed alongside Route 23. (They were adopted early so they could be further from the site of the poison spray. It didn't save them.)

So, although Irene loves kittens...Irene is not a cat who produces healthy kittens. And Irene is also a cat who grieves when her kittens don't survive.

I'm fond of Irene. She may not know it, because she doesn't demand attention as much as Heather and Ivy do, but I do appreciate her role as the sweet, motherly, homebody cat in the Social Cat family. She's been an excellent aunt to her sister and foster sister's healthier kittens. She's a better, and happier, aunt than she is a mother.

Irene is one cat who I believe needs to be spayed. Not badly enough to use up the Emergency Surgery Fund, which is only for cats in mortal danger...but badly enough that, if those who chant "Neuter and spay is the only way" (to achieve a world without domestic animals?) care to put their money where their mouths is, I would schedule Irene's operation tomorrow.

I don't want to publish the e-mail address here...in case anyone seriously wants to spare Irene from another round of bereavement, they can contact me at the e-mail address at my Blogspot. (I'd have to double-check, but I think it's possible to save me a few steps and send payment directly to the vet.)

The photo that should appear with this article is mine, taken by me, showing Irene's big, soulful, yellow-green eyes.

I wonder if your local animal shelters charge so much to adopt a pet, thinking this will weed out those who just want a kitten or puppy on a whim? If that is true, it doesn´t work. I had a neighbour in the UK who had 2 pedigree puppies and neglected them both. He got the first one a Dalmatian as a real life toy for his kid and the second a cocker spaniel as a gift for his latest girlfriend. I have to disagree with your stance on neutering and spaying though, and hope shelters do keep on doing this, there will always be enough irresponsible pet owners in the world who let their dogs and cats breed willy nilly for the practice of dumping unwanted offspring to face a life of suffering to continue to fill up kill shelters, or overwhelm rescue centers.