A Great Day In My Life 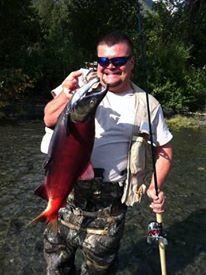 I spent two wonderful years in Alaska. While I was there I was like every other Alaskan in that I rarely slept during their amazingly short summer.

Summers up there are not like the summers that I must endure because I live in Southern Louisiana now. Temperatures ranged from 65 to 75 degrees F during the "heat" of the day, and days lasted for 18 hours in late June and early July.

What I loved about summer the most was the salmon. Rivers in Alaska are full of these tasty creatures for most of the summer. I have included a photo in this article of the biggest red salmon I ever caught. This was a monster sized red. It took me almost an hour to finally bring this fish to my net. It was quite an honor to finally subdue such a prize.

The day that I caught this prize was a great day in my life. It began with my girl and I waking up in our RV and deciding that we were going to fish at the confluence of the Kenai and Russian Rivers. That big red was caught on my very first cast of the day. The very first cast set the tone for the whole day. We caught fish after fish after fish. We both caught our limits of salmon that day. Then we wearily returned to our RV and grilled up a big silver salmon, had a couple of adult beverages and ended a perfect day.

I must admit that I was not crazy about eating salmon until I lived in Alaska. I had eaten the salmon that were purchased in supermarkets before, but I never cared for it. I could not believe how good a fresh salmon that was cooked on the grill tasted.

I will be writing more about my adventures in Alaska. I had many of them. I hope to get up there again someday, but my life is so crazy anymore, it might not happen!

Awesome catch, I remember years ago my step-dad went fishing in Alaska and he showed us pictures of similar size salmon the he caught.

I want to visit Alaska at some point. I would like to visit there during their long summer days, as well as during their cold winters.

I love salmon, and that´s a whopper. I´m one of those wimps who might have thought twice about eating something I had caught though, but in the case of Salmon most die after spawning anyway so I could have justified it because of that.