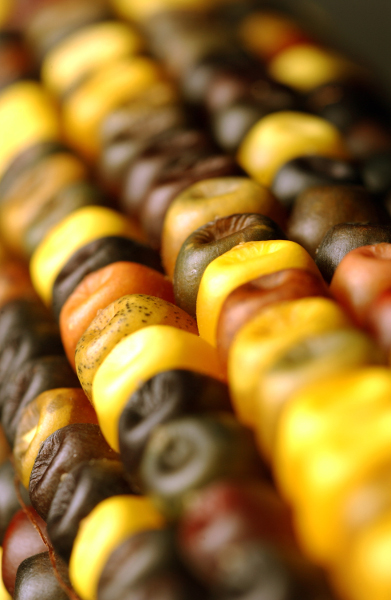 When you buy an heirloom vegetable, you are guaranteed that the plant or seed is non-GMO. Quite often it's a plant with an interesting history – sometimes a very rare plant. When I think of heirloom vegetables I picture old-fashioned runner beans and Brandywine tomatoes, and big red Cinderella pumpkins. What I don't usually think of is corn.

Corn – maize – is a staple crop for much of the world. In fact, it's the most grown food crop in all the world. That's what makes it so attractive for big business. While some companies look for innovative ways to market existing varieties of corn – like Sunbites pre-cooked corn on the cob . Other companies like Monsanto have developed genetically modified corn that has been marketed so aggressively that the majority of corn and corn products in North America today are GMOs.

But while agribusiness is trying to change corn, people like plant breeder Dave Christensen are trying to preserve traditional varieties of corn. Christensen has spent decades developing Painted Mountain corn, one of the most hardy and genetically diverse maize cultivars available. It's a beautifully colourful grain, that contains a whole rainbow of colours. Some growers have actually found ears of corn that express all the different shades of just a single hue!

Christensen was looking to produce a variety of corn that could be grown at great heights and that would be resistant to the harsh weather of the Montana Rockies. The breeding processed involved introducing stock from a great many rare types of corn, some of which may actually be extinct now. So the Painted Mountain corn preserves some part of the DNA, of corn strains that will never again be seen on earth.

Now that Christensen has a staple cultivar he's working with another breeder, Frank Kutka, to introduce a pollen-blocking trait into his organic corn. This would offer Painted Mountain corn protection against the cross-pollination that's a problem with genetically modified crops engineered by companies like Monsanto. You see, when GM corn is grown near other varieties of corn its pollen can be spread. Because the genetically modified corn is dominant, its DNA takes over and it contaminates corn that should have been GM-free or even organic. Obviously, the ability to block the GM pollen would be a good thing for farmers who want to grow GM-free crops.

In a play on Monsanto's “Roundup Ready” corn, Kutka calls his corn “Organic Ready.” The fact that healthy organic varieties can now resist contamination from GM corn – well, it just makes me want to smile!

Note: This content is adapted from an earlier article by the author, which has since been removed from Bubblews

We are victims of GMO as they do all sorts to trick us.

It's corn season here in New Zealand at the moment, got to love it! Not sure it could be considered organic though.

Yes people who are going to grow their own vegetables should try to pick heirloom varieties to keep those ones around for sure.

This is a fascinating subject isn't it?