The Barbary Apes of Gibraltar 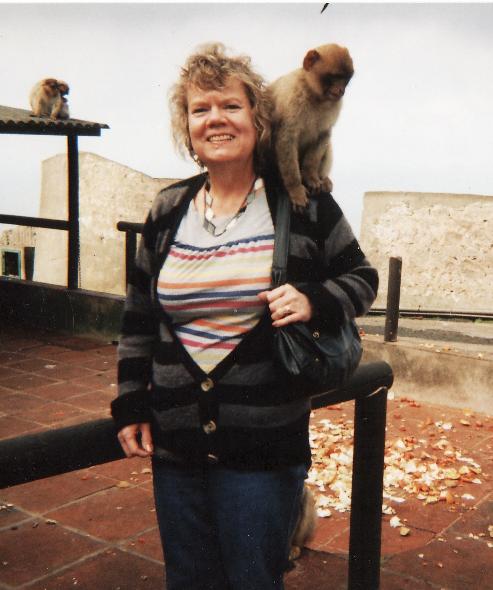 Everyone knows that monkeys have tails and apes don’t, right? Wrong!

The Barbary Ape, or Rock Ape, Europe’s only free-living primate other than man, is actually a tailless monkey, more properly called the Barbary Macaque ( Macaca sylvanus ). The ancestors of those found on the Rock almost certainly come from the Atlas Mountains of Algeria and Morocco, where their cousins can still be found. Theories as to how or why they arrived in Gibraltar are numerous, but the most likely (and prosaic!) is that they were brought across as pets by the Moors who occupied the southern region of the Iberian Peninsula 711-1492. As pets do, they escaped! And there they still were when the British took Gibraltar in 1704…

Now, I’m not about to discuss the rights and wrongs of the British presence on Gibraltar. On the one hand, I’d be pretty peeved if the Isle of Wight, just across the Solent from where I live, was claimed by Spain; on the other hand, Gibraltarians have time and again made it clear that they want to remain British. They’re the ones that live there, after all!

What is very strange is the way in which the presence of those other ‘invaders’, the Barbary Macaques, has been linked to the British presence on Gibraltar. At some stage, the belief took root that, if there were no more ‘apes’ on the Rock, British rule would cease. During WW2, the fact that the macaque population had dwindled to seven monkeys was used as anti-British propaganda by ‘Lord Haw-Haw’ (aka William Joyce) in his broadcasts to the British public. Britain’s Prime Minister, Sir Winston Churchill, took this sufficiently seriously to order that more "apes" should be acquired as quickly as possible. This forms the basis of the novel ‘Scruffy’, by Paul Gallico.

These are far from ideal neighbours. My mother was raised in Gibraltar during the 1930s, as my grandfather was in the army, so I was brought up on tales about Gibraltar much as other kids were told fairy stories. One character who figured in these was a simian thug called Jacko, who led one of the troops of macaques. I think he might have been the original for ‘Scruffy’ in Paul Gallico’s book. Jacko and his minions thought nothing of ransacking houses for toys and edibles, and he even used to make forays into the town for food and amusement. My grandmother reckoned that he stole a cake from her kitchen on one occasion but, if he was the culprit and this was all he took, she got off very lightly. When I was first working on this article, I did find a reference to him in a pre-war edition of the Glasgow Herald, but the link no longer works.

Nowadays, tourists encountering the macaques at close quarters are warned to keep a close grip on handbags, mobile phones and cameras, as these are all likely to be targeted by mischievous monkeys. What’s more, it is now an offence for members of the public to feed the monkeys. However, they remain a major tourist attraction, and it is possible to interact with them – though with caution, because they have teeth! They are found mostly in the upper reaches of the rock, although incursions into Main Street still occur

I have been to Gibraltar twice in my life, once as a teenager in 1965 and once in recent years as a "down Memory Lane" exercise with my mother. Apparently "Gib" had changed little from pre-war days on the first occasion. On the second occasion, to my mother’s consternation, it had changed beyond all recognition – but the ‘apes’ remained…

Image Credit » Photo of me taken by my mother, Gibraltar 2007, and used with permission. No, that isn't RikRavado with me - he's not so pretty!

My wife was on Gibraltar a few years ago and she was warned about these simian thugs. The friend she was with had the pocket of her jeans ripped off because the apes thought there was a packet of sweets in there. Don't trust them - in fact, don't even go near them!

My mother and I took a taxi up to the main monkey hang-out, Kasman, and the driver offered to entice an apelet onto my shoulder so that my mother could take a picture. The littl'un behaved himself - but I wouldn't have trusted one of the adults!

I remember reading about not annoying those simians in that location. Makes sense to me!