Vegetable Soup in my Crock Pot 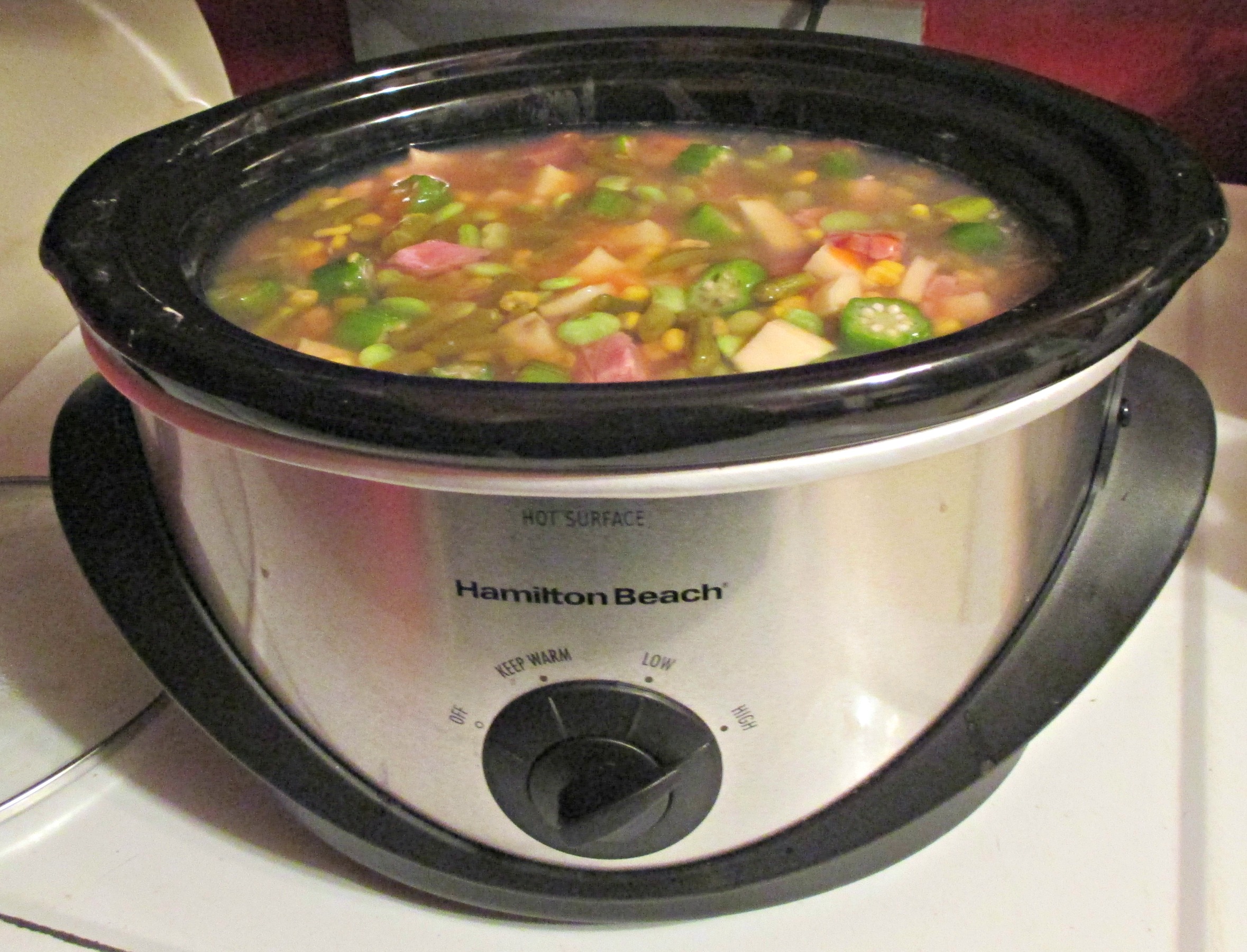 The weather has been very cold and very wet here for many days now. It is good weather for warm, hearty comfort food.

I woke up this morning and decided that some Vegetable Soup sounded good. It was either soup or chilli, and since I had the making of soup it was the winner.

Also, I got this new slow cooker for Christmas and have been looking for reasons to use it.

Starting soup at 9am to have at supper time and not having to pay it much attention in between sounded like a plan to me.

For me there is not a certain recipe I follow when I'm making my soup. Its more like a pot luck kind of dish. If its in the cabinet and it sounds yummy I toss it in.

In the freezer I had a small, cheap cut of beef. One of the kinds that are going to be super tough. I cut that up into tiny bite sized pieces and tossed it in. I also put in a bag of frozen baby limas, half a bag of frozen okra, a can of green beans, a can of corn, and I cut up three medium sized potatoes. I thought my soup was missing something, but I lacked tomato to put in it so I opened a can of tomato soup and dumped in.

See, I told you, I just kind of go with whatever I want.

Now it has been cooking for 4 hours and the house smells warm and yummy, like soup. I hope it will taste as nice as it smells at the end of the day!

Image Credit » Image is Mine, Nonersays

I don't tend to follow a strict recipe either when it comes to making soup. I pretty much never make the same kind the next time around. I love making big batches of soup and stashing some in the freezer for later.

I love vegetable soup in the winter it just makes you feel fantastic. I also cook mine in my crockpot, your photo looks yummy.

I used my crock pot for the first time today, I was so pleased with the results.

That's awesome. What did you fix using it for the first time? This was the second time I had used mine since I got it for Christmas. The first time I made some cubed steak and gravy with potatoes.

Thank you. It tured out to be VERY yummy. I had 3 bowls last night and another today for lunch.

I thought about freezing some of this batch (I'm the only one in the house who will eat it), but in reality I think I will end up eating all of it in the next day or two.

Vegetable soup does sound good with this dismal weather! I use my crock pot at least once a week, for soups and other things.

I love using my crock pot to make soups. I don't follow recipes either. It's just not my way of doing things. I know, what goes in the soups and they always turn out good.

Soup is my absolute favorite thing to make, freeze, and eat. YUM

I, too, enjoy soup cooking in the crock pot while I am busy with other things. And yes, I toss in a bit of anything and everything when making vegetable soup.