What not to do in the Kitchen 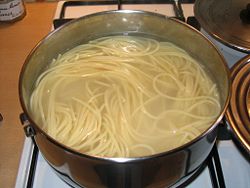 I grew up on three farms and like most farm boys back in the day, I became a Jack of All Trades, although the expression goes, “A Jack of all Trades, but a Master of None,” I did master a few with the passage of time. I became an expert automotive machinist/mechanic, and mastered the building trades—carpentry, electrical, plumbing, masonry, painting, etc. Unlike most farm boys of that era, I also developed a lifelong interest in cooking, I learned to cook at my grandmother’s knee and was passionate about cooking by the time I was ten or eleven years of age. I never lost that passion for cooking, it has been a lifelong learning experience and like most self-taught cooks, I made mistakes but I’ve learned from those mistakes and have become a better cook, I want to share a few of those mistakes with you so you don’t have learn by making them too.

Almost everyone, except perhaps children just learning took, know that you have to thaw frozen meats before cooking them, but many people will try to cook meat right out of the refrigerator. This is one of the most common mistakes made by home cooks, for the meat to cook properly, it has to be brought to room temperature before cooking, letting it set on the counter in a covered container for 30 minutes should do the trick. Cold meats cook unevenly from the outside in, the warmer outer layers will cook faster leaving the inner most part undercooked which can lead to food that’s unsafe to eat. With frozen meats, I prefer allowing them to thaw out in the refrigerator overnight and then bring them to room temperature before cooking.

Say no to sticky, clumping noodles

Spaghetti noodles that clump together is usually the result of cooking them too long or using too little water to cook them in, insufficient water causes the ratio of starch to water to increase which leads to sticky, clumping noodles. Many people tend to use smaller pots and less water because the less water in the pot the faster it boils but the results is an unappetizing gluey mess. Some people like to try for the best of both worlds by adding a little oil to the boiling water before adding the pasta, but the oil prevents the pasta sauce from clinging to the pasta, as it should. Avoid both temptations and use a deep pot with plenty of water when cooking pasta.

It’s best to use the type of herbs called for by the recipe, but you can switch back and fought if you recalculate the amount you use, otherwise the food will turn out either bland or too herby—dried herbs are usually much more potent than fresh herbs. A fairly safe practice when switching dried herbs for fresh herbs is use three time as much fresh herbs as you would use dry herbs, if a recipe calls for three teaspoons of fresh herbs, use one teaspoon of dried herbs or if the recipe call for one teaspoon of dried herbs, use three teaspoons of fresh herbs. Keep in mind that you can always add more herbs if needed but you can’t remove any once they’re added to the pot.

The case of the shriveled bacon

Does your bacon end up shriveled up, dry, and burned in places, the cause is uneven cooking. No matter what type of cooktop you use gas or electric, all the heat is concentrated at the center, middle part of the pan’s bottom, for evenly cooked bacon use your oven. Place parchment paper or aluminum foil on the bottom of a baking sheet and place the bacon flat on the sheet liner, making sure the strips of bacon don’t overlap, the parchment paper or aluminum foil keeps the bacon from cooking in its own grease. Preheat the oven to 400 degrees Fahrenheit before placing the pan in the oven and leave it remain in the oven undisturbed for 15 to 20 minutes to cook to perfection. I particularly like this method because I can cook larger quantities of bacon at once without having to worry about burning it.

Love that tip for cooking bacon, but doesn't it leave the oven a mess?