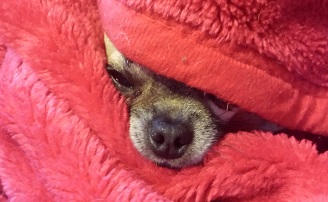 Recently a friend was talking to me about a relationship. Something was happening that she didn’t understand. I asked her why she didn’t ask her partner about it. She replied that she preferred not to know – that she would “let sleeping dogs lie”.

Now, I don’t really understand this attitude. I always want to know the worst straight away, and prefer a blazing row to a silent sulk. Rik and I often shout, and have been known to throw things – but we’ve never gone to bed at night without at least making up and postponing the argument until the next day if we can’t resolve it immediately. And we’ve lasted for 43 years next May.

However, leaving the rights and wrongs, I found myself wondering about the proverb. What happens if you wake up a sleeping dog?

Well, if it’s anything like me first thing in the morning, it will probably bite you. Not that I bite, I hasten to add – but I do growl!

The other point is that it’s usually a lot more peaceful when the dog’s asleep. While we were looking after a rather lively dog for a friend, I remember keeping very still in bed in the morning. He was sleeping on his bed in a corner of our bedroom, but I knew he’d want food and entertainment as soon as I moved!

Anyway, Cookie the Chihuahua (the dog who owns my daughter and her partner) demonstrated it beautifully for us over Christmas.

I was rather worried because I was going out with Cookie’s humans, and she knows me better than she does Rik and my son. However, although there was a vague protest as we went out, she didn’t seem too upset.

When we came back, Cookie announced our arrival, as we expected. What really amused us was her location. She was yapping as she bounced up and down on the tummy of my son, who was lying on his back on the sofa, watching a DVD. Apparently she’d been fast asleep there ever since we left!

Yes, things were definitely much quieter when that sleeping dog was allowed to lie!

Image Credit » Photo was taken either by me or by my daughter. Either way, I have permission to use it.

So What Am I Doing?

Is Old Age a Matter of Choice?

I am like u I want to know what is going on. And yes I love it when my dogs are asleep, they look so innocent

Oh I couldn't be doing with that, I'd NEED to know. I can't live not knowing things!

Interesting saying, it is the first time I hear about it. I think we don't have nothing similar in Spanish, but it does make sense to me!

Well I finally met the "infamous" Rik, your dear hubby! And congrats on being together for over 40 years. It's not always easy, but well-worth fighting for. Well, not knock-down-black-eye fighting, of course! ANYWAY, making like an ostrich isn't healthy for a relationship. Sometimes the best recourse is to wake that ol' dog up and clear the air.

I hate not knowing things. I agree you should never go to bed on a row.

I'd much rather know what is going on. It would drive me nuts otherwise! *doh* lol
Love the picture of Cookie by the way. It's so adorable! :)