On the Road to Chattanooga Part 1: Rocky Face Ridge 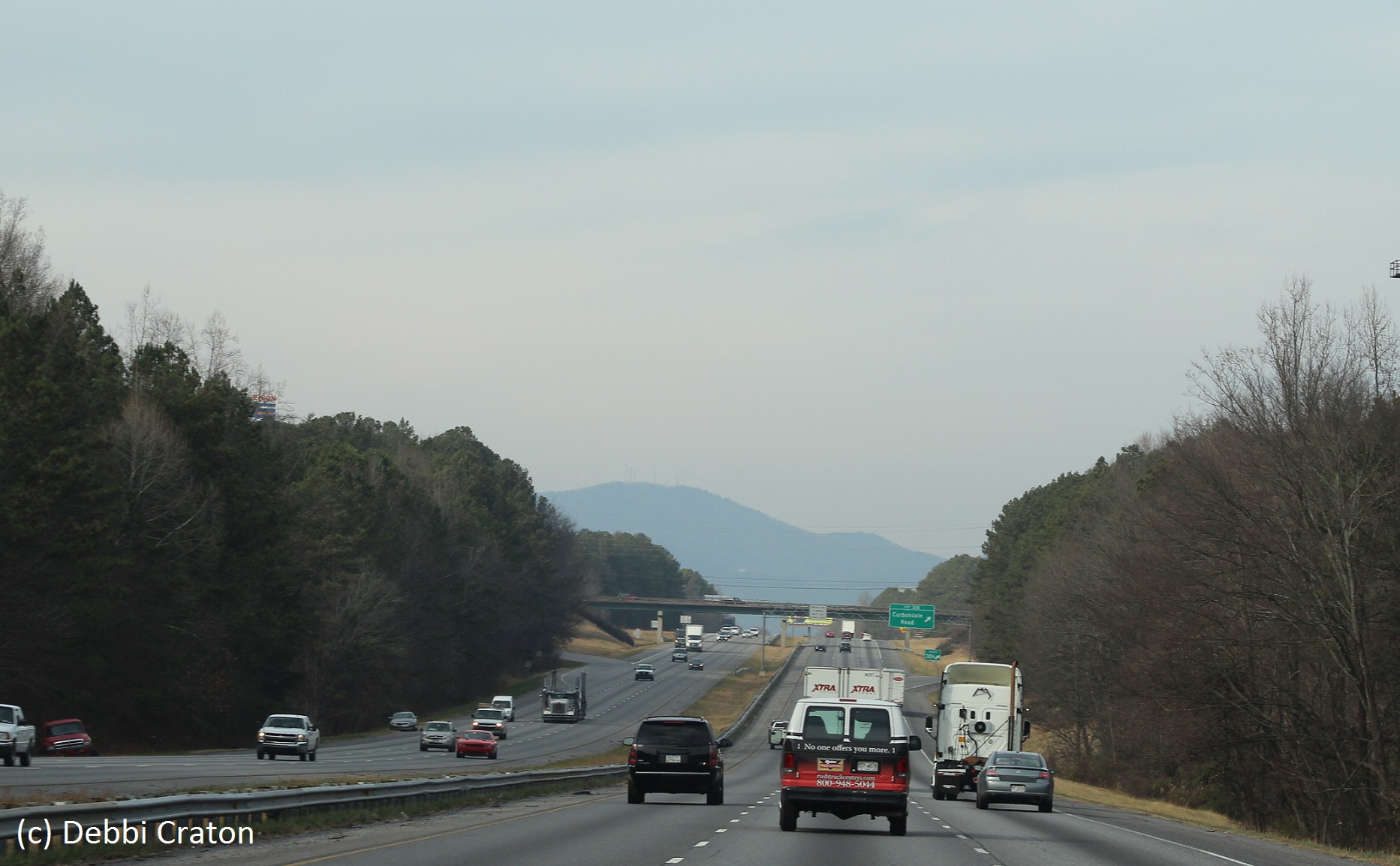 My friend and I had tickets to the last show of the Jubilee Christmas Tour 2014, held in Chattanooga, Tennessee on Monday, December 15, so we've been planning this trip for awhile. Since we live a couple of hours from Chattanooga, we headed out midday to get there well before rush hour and find the location before dark and traffic set in. And it's a very good thing we did, but that's more than enough for a future post.

Well, it started out that way, at least.

It also started out sunny, without a cloud in the sky, and warm.

I love the I-75 corridor, although not so much the tremendous amount of traffic, especially truck traffic, I have to share it with. When I was in college in Middle Tennessee, I drove this route twice a week for three years and never got tired of looking at the mountains, even when I was totally sick of looking at brake lights, trucks, and billboards. Since my friend was driving, this trip gave me plenty of opportunity to take pictures, even if it was from inside a moving car.

The terrain of the northwest corner of Georgia is dominated by a series of long predominantly north to south ridges that run slightly northeast to southwest, of which Lookout Mountain is the most dominant. The north to south interstate in this area runs slightly northwest to southeast, bisecting them at gaps between Dalton and the Tennessee state line. Immediately after crossing the state line, taking I-24 will bring you over Missionary Ridge and around the foot of Lookout Mountain.

If you can ignore the trucks and the billboards, the scenery along I-75 between Dalton and Chattanooga is beautiful.

In the photo above, you can see the first glimpse of Rocky Face Ridge south of Dalton. (Right click on the photo to open a larger version.) 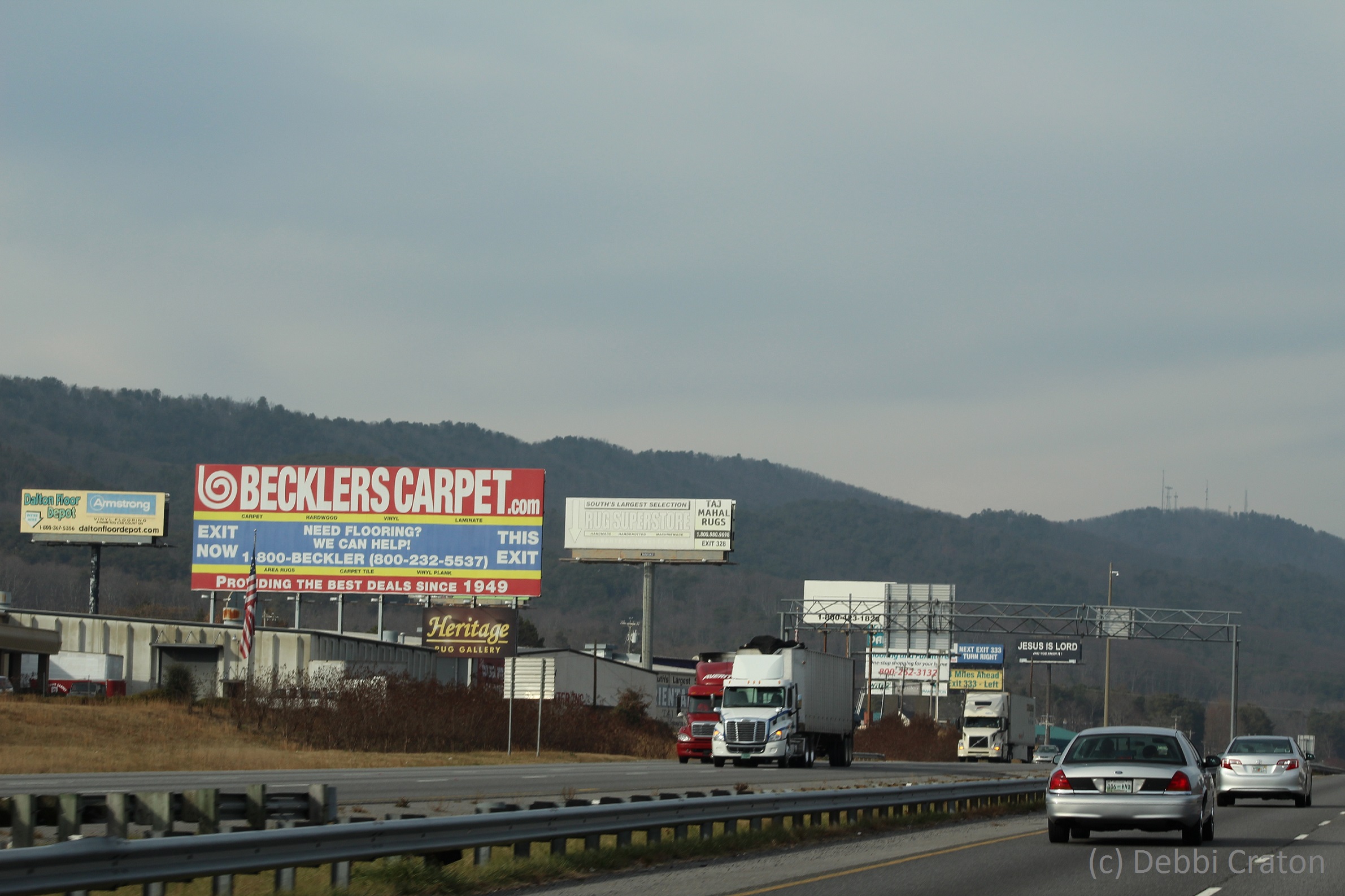 Between all the billboards and all the trucks, it doesn't take long to figure out that Dalton, Georgia is the Carpet Capital of the World.

I-75 parallels the route of the Western and Atlantic Railroad from Chattanooga to Atlanta. With the exception of one ill-fated detour to Dallas, the Atlanta Campaign during the Civil War followed this same route in 1864. Dalton was the first major engagement in that campaign 150 years ago. 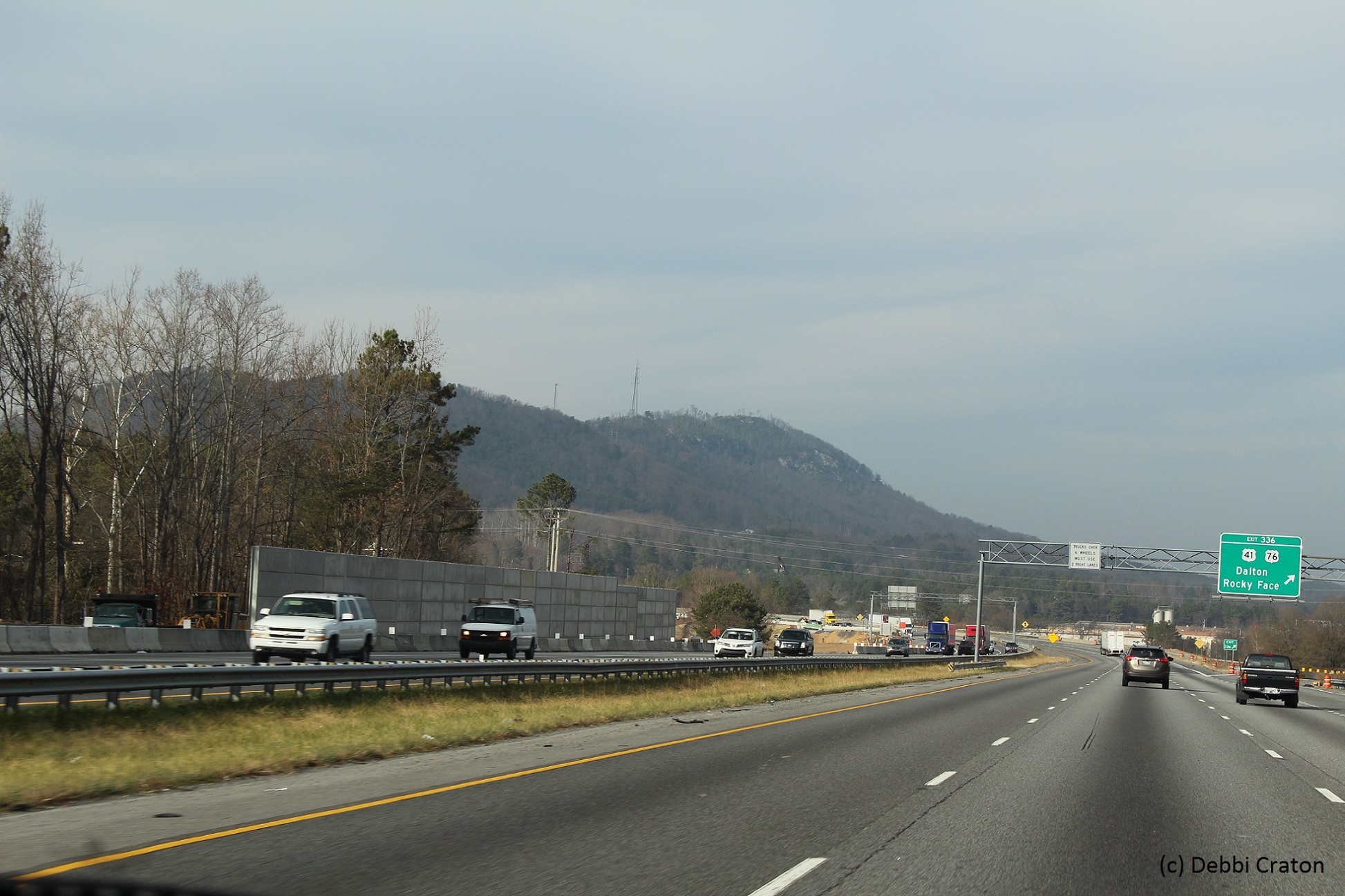 The steep north end of Rocky Face Ridge is referred to as the Buzzard's Roost, and played a big part in the defense of Dalton.

I-75 cuts through the ridge at Mill Creek Gap below Buzzard's Roost.

Photos and content (c) 2014 by Debbi Craton. May not be used without permission. All rights reserved.

Image Credit » Photos (c) 2014 Debbi Craton. May not be used without permission. All rights reserved.

On the Road to Chattanooga Part 2: Ridges and Valleys

Some funny names. We have Indians ones up here. Sounds like quite a day. Hope you enjoy yourselves.

Oh, I haven't even scratched the surface on place names in Georgia!

Must have been a fun trip. Thanks for sharing it with us. It's the only way I get out these days, except on foot.

Interesting. I hope to hear more of them.

In spite of the "plenty of time to find the place" and the "wow, it's nice and sunny and pleasant" aspects of the trip promptly falling flat, it was a lot of fun. Of course, I wasn't the one driving rush hour in the rain. (But it was Chattanooga. Been there, done that many, many times already.)

I think that we were on this highway for a bit on our move to Florida... and on our exit a little over a year later.

Probably so. You're heading to Florida?

No. We had lived there for a bit over a year a while back. It was his mother's idea.