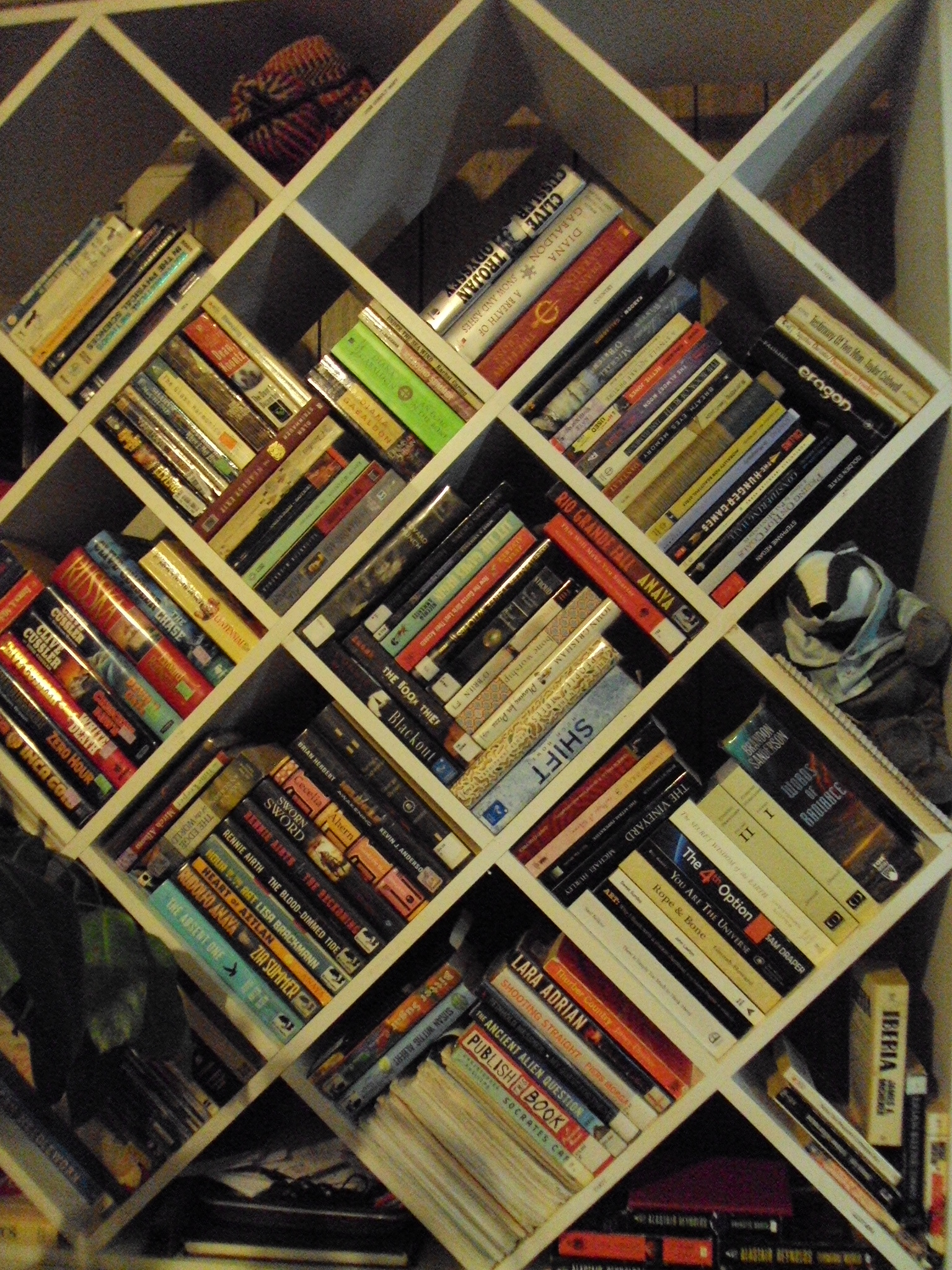 Today I am going to finish a short story collection about vampires, By Blood We Live , including stories by Neil Gaiman, Stephen King, and many other great authors. I realized this Halloween, when trying to do a post challenge about Halloween books on tumblr, that I haven't read any really memorable books on vampires, werewolves or other Halloween creatures, besides Ray Bradbury's Halloween Tree and the Harry Potter series. It was sad. I actually could not think of any other books I enjoyed that involved vampires or other creepy classic Halloween spooks. Since this short story collection was next in line on the A's shelf in my library, I had to check it out for my Read Your Library challenge anyway, so I am actually reading a vampire book this year. So far I like it- some of the stories are dull, but most are excellent. There is a vampire Sleeping Beauty, which makes a lot of sense, and a story about how Jewish people who don't use crosses would defend themselves against vampires. I'm about halfway through this book right now.

I also am reading a book about the Kurds and their awful, messed up history, The Kurdish Spring , by a diplomat named Phillips , who worked on the 'Kurdistan' problem for decades, obviously unsuccessfully. The Kurds are an ethnic group, like the Armenians and the Serbs, that spent a long time subjugated under other nations' rule. Unlike the Armenians and the Serbs, though, the Kurds have not been allowed to claim their lands as theirs, nor have they been allowed to embrace their language and customs without severe harrassment on all sides. A friend of mine in grad school was a Kurdish intellectual in exile, and I've soaked up a bit about the Kurds from him, but the whole story is really depressingly awful. I like to imagine that the civilized world doesn't just write off a whole ethnic group for the sake of oil and diplomatic points, but that is exactly what happened, and what keeps happening.

It doesn't help that the Kurds were so instrumental in the massacre of Armenians during the Armenian Genocide, or that Kurdish mercenaries have worked to slaughter their own people frequently throughout history. It also doesn't help that the Kurds tend to have very militant, angry spokespeople. The PKK, for example, was/is a terrorist group that says it is trying to help establish a free Kurdistan, or at least establish better conditions for the Kurdish people, but they do so by killing teachers and doctors and terrorizing Kurds who hold jobs within the system of the country where they live. At that point, the average ordinary Kurds might as well just accept that if the Turks or the Iranians aren't going to exterminate them, their own people will happily finish the job. There are certainly no 'good guys' in all this mess so far, on any side. I don't read a lot of books like this any more, because they just make me believe a little less in the ability of our species to be worth saving.

Last, but not least, I am reading The Way of Kings , by Brandon Sanderson , the first book in his current epic fantasy series. I won the second book in this series from Goodreads, so I checked out the ebook of the first novel in the series through my library. The narrative starts in what feels like the middle of the story, and jumps around a lot so far, so it is proving hard to become acquainted with the world or its characters. Generally in a 1000pg book one needs a solid plot thread and a solid main character to lead the story, just to have something to focus on. Robert Jordan's Wheel of Time series started out in a small village with a couple characters, and followed them as they set off on an adventure, an adventure that started small and grew as the series progressed. Sanderson started his series with some apparently semi-immortal swordsmen, and then a dude who is wielding strange powers in an assassination on a king, with no context to place these events in. The story keeps hopping through time every chapter, so that just when jou start getting into the story it abruptly shifts and you start over, almost as disoriented as before. I'm not impressed yet with Sanderson's epic-starting abilities, but perhaps once the story gets going it will be better.

Favorite Books I read for the Read Your Library Challenge

The history of the Kurd is definitely not my choice of books, especially in a festive season.

Certainly it is not a great book for everyone. I am used to reading history and political science academic books in the winter, so it suits me well enough, and since it is a book that will be published early next year, now is the right time for book bloggers to read it so they can write up reviews for the blog by the day the book comes out. It's the 'work' side of being a book blogger. My family is never very festive, anyway, so for us December is just another month, just cold and with the added stress of family get-togethers near the end of it.

I like fantasy stories, they make u forget about reality for a while..