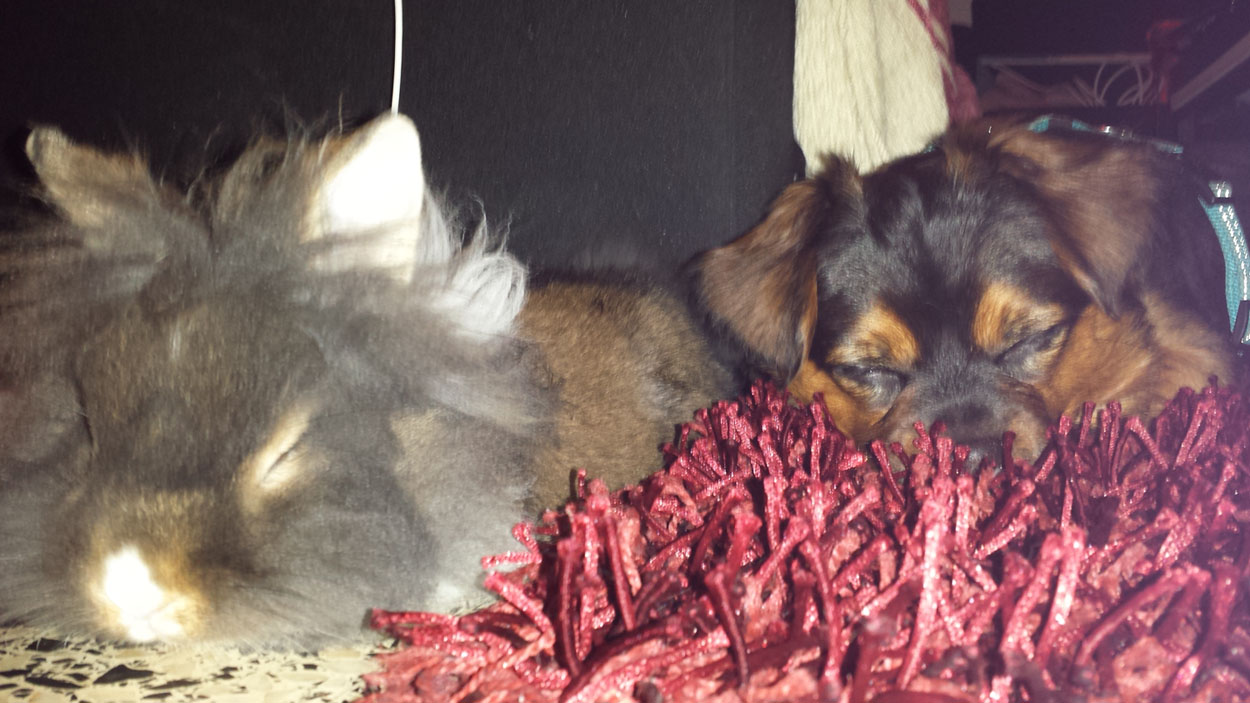 Today is a bit of a worrying time for me, let me explain.

Above in the picture is my pet dog Bamboo and house rabbit Tiki. Well Tiki is in the vets today for an operation. You see he is only 1 year old, but from the start we have had a problem with Tikis teeth. They grew very quickly and caused abscess´s in his mouth, so I had them cut. However this didnt help and they grew back wrong and with an over bite which made it difficult to eat, plus they grew so fast that it was costing a lot of money to keep having them cut every 4 weeks.

So I made the decision to have them taken out completely. The operation was long but went fine, but was worrying because rabbits dont react well to anesthesia and it can cause problems with their bowels and they can die from it. So it was quiet a nervous time while he was in surgery. All went fine apart from they could only find 7 out of the 8 teeth they needed to take and assumed Tiki himself had taken the last one out.

Now 2 months later the other lone tooth has grown through so he has gone back in for the operation to take it out today. Im a bit calmer than last time as he survived before, but I still feel nervous about what could happen.

I´ll update you later on how he is.

I have to say I'm impressed here.

Gosh, never heard of a rabbit's teeth being all taken out before. How will he eat? Will he need a special diet?

No, no special diet. Im having all of his front teeth taken out but they have teeth at the back near the throat that you cant see, and he can she with those. So just normal food. However he cant chew pieces of wood. or a whole carrot anymore, it has to be sliced up.

Aw poor bunny! I hope all goes well and he feels better soon. I have never heard of this, but I don't know a lot about rabbits.

Thanks hun, apparently its common for them to have teeth problems but not quiet as severe as what Tiki has. IÂ´ll update you all later when I have him home :) x