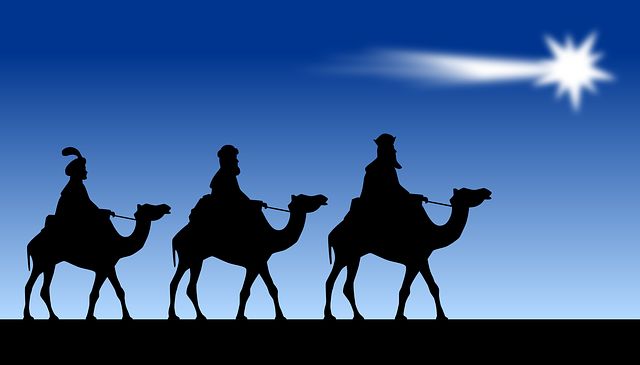 I would like to humbly submit my application to join the cast of the first annual Friends of Persona Paper Nativity Play . I would direct my request to Ellis as he seems to be the human in charge, but as an animist I have no barriers whatsoever to accepting that you are quite capable of making casting decisions of your own accord. And I feel sure you will waste no time in communicating your preferences at the appropriate time.

That being understood, I should like to put myself forward for the part of Melchior. While this part is normally played by a man, I do think I am uniquely qualified as a Pagan Priestess who recognizes Jesus as one of many wise souls who have lived among men over the years. It does seem fitting that those who take up the roles of the Three Magi at least know what a Magus is, after all!

I should say now that I just don't feel up to taking on the role of treasurer at the moment; Caspar will have to go to someone else, despite my pale appearance. And while I do have a family link to Baal through my mother-in-law, I don't think I'm quite the protector type needed for the part of Balthazar.

None of the names I usually answer to are a numeric equivalent to Melchior using gematria, and I must admit I don't think I'd be great with camels. But what the heck! The name means “king city” and I have spent most of my life in a really big city. That works, doesn't it? Besides, it's probably the least ironic part I could possibly play in a Christian Nativity Pageant . . .

So, what do you say?

Love and kisses and stuff,
Ruby


This is my Humor category entry for Dawnwriter 's A-W Category Challenge and a reply to Ellis' casting couch post .

Shame on me that I had to surf to find out who or what Melchior was. I knew the kings as the 3 magi. Welcome. I have every right to as after all I am the star that leads you to the crib! (lol)

I was thinking of you, Grace, when I picked out the image! I knew you'd be pleased with such a bright star :)

So you read my comment on Ellis's post. No denying that I do play a tiny role here as a leader in Persona!!

And having attitude too

Love and kisses are good...bribes don't necessarily have to be monetarily...never let it be said that I'm not flexible...lol

Flexibility can be quite interesting, John. Especially when there are couches, bed linens, and tea towels involved... :P

Ellis FYI: I hear the standard bribe here on PP is cash and chocolate, to be forwarded to admin, on behalf of the recipient. Cash will be forwarded on to recipient.

I just noticed - We can't have a camel this year. The evening of the 24th is a Wednesday. He'll ruin the mood with his "hump day" jokes.

Too many people dump the ego and hold onto the self-deception. This confuses me.