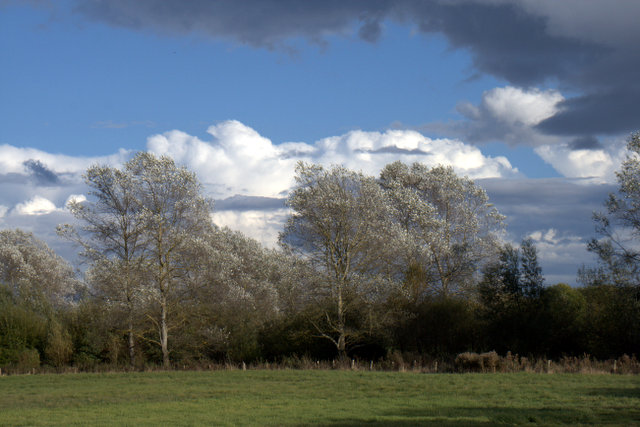 In contrast to the usual autumn colours of brown, gold, yellow or red, these trees offer a silver sheen on their undersides that shimmered nicely in the wind. I believe them to be - Populus alba . (Poplar)
Just as I had taken the shot I got into conversation with a passer-by who remarked that it was lovely to see the trees but feared for their future because of the building of more houses on the already vast estate where they are situated.
All around the town of Aylesbury there are housing estates, the picture gives no clue as to the extent. Another four thousand are planned on a field that is immediately behind the trees.
The leafy way in the picture actually follows the course of the river Thame (not the Thames) and I stood on a known flood-plain with housing immediately behind me. In view of the flooding that this country suffered last year in so many places, I fear for the owners of these new houses.

I used to care, but things have changed.

It's a shame that this countryside will be ruined by more housing. Building in a flood plane is so foolish.

The trees are pretty. Maybe they will decide to keep them even if they build houses there.

Converting jungles into concrete jungles seems to be the pass time for builders at a global level. When we shifted here there were hardly any houses or buildings but now the topography has completely changed. We have 3 roads around us and that has saved anything coming close to our property.

For the above instance it is a case of the speculators getting the upper hand and using 'legal' means to apply their trade. i.e. - government has announced that X amount of homes are needed and therfore they are justified in land-grabbing and building before local authority can legislate what they deem to be Actually required.
Greed will always win out over common sense.

It's too bad the countryside has to be destroyed for homes. But people need homes.

Those trees are some of the first I noticed when I moved here. I loved the way they sparkled in the light, but I had to ask around a bit before I found out what they were.

It's always sad when a beautiful tract of land is turned into a housing development and most of the trees are bulldozed.