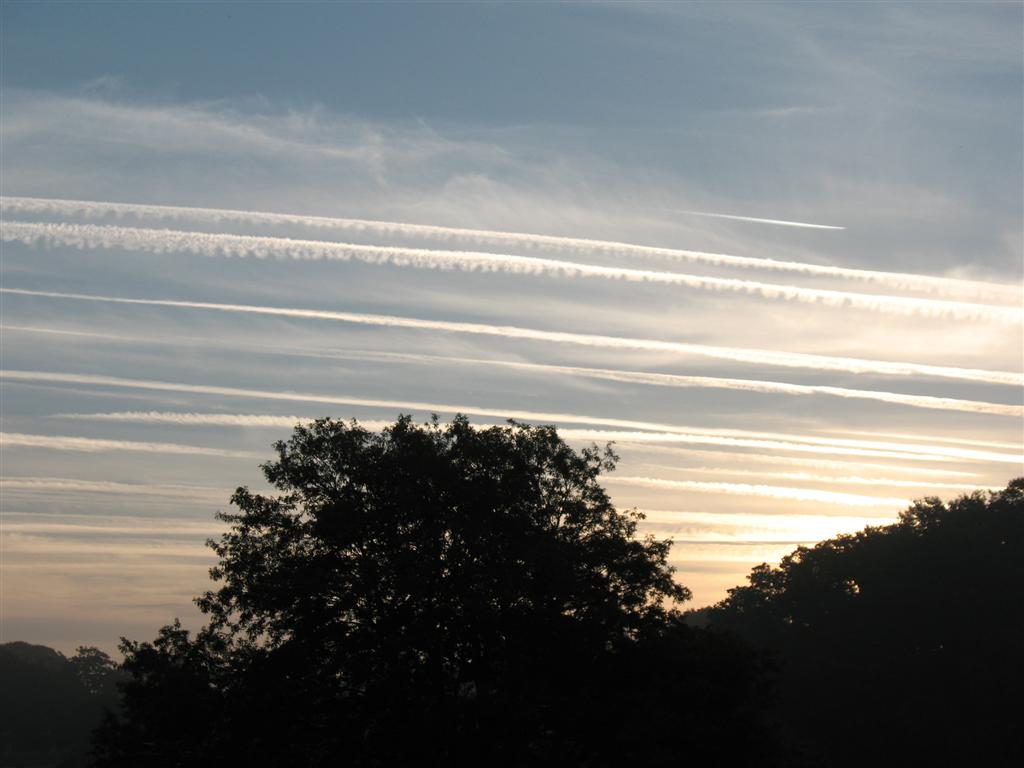 I woke up this morning to a lovely sunrise and was amazed at just how many vapor trails there were overhead with jets all apparently headed in the same direction.

Where we live we are on one of the flight paths from the USA and Northern England across to Europe and beyond, as well as being in the area where planes for the two main London airports often circle before landing when the airports are busy.

It's always nice being greeted to nice sunny skies when I get up in the morning, it makes a change from the cloudy days that we have had lately, and of course Autumn is now here and the clocks will be going back an hour in a few weeks, heralding the end of my leaving work in daylight for the next six months.

Do you get a lot of planes and vapor trails in the skies where you live too?

Mr Fox Captured In Our Back Garden

It so many, but there will be trails everyday. I love watching the trails when we go for evening walks

We often see more trails in the morning, I think it depends on the humidity in the atmosphere where you live, because sometimes we don't see any, although you know the planes are there.

Most of the jets flying high above us aren't from our local airports though, they are from hundreds of miles away or further.

We see a lot of vapor trails, but are far enough away not to have the noise of planes. Do you get the noise along with you lovely striped skies?

Mostly we don't hear anything, the planes are too high and too far away. You don't usually hear anything when they are cruising at 35,000 feet. Probably a good thing! The planes from our local airport can be pretty noisy sometimes, but you get used to them and it's only a small airport so not a constant roar.

Beautiful picture. I absolutely love it. The trials have made the sky look like water rippling.

That is a nice photo. We don't have too many trails here at our house. We are a ways from any airports.

We do not seem to be on a major flight path. But we did get to see our yard when we flew to Toronto last year. So, some days planes fly over here.