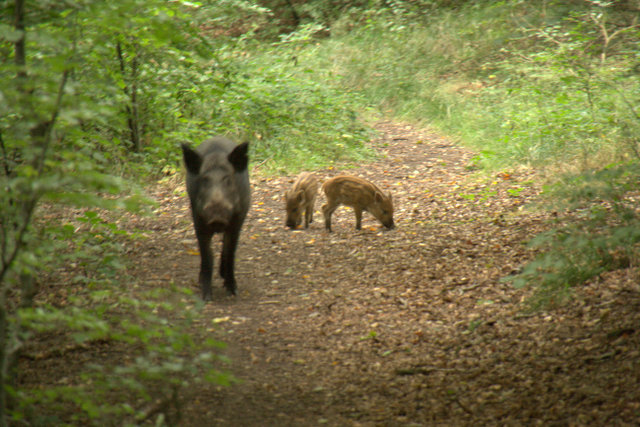 I knew that the wild boar were around as the grass outside the back gate had been uprooted. A trail of overturned earth in each direction showed that the boar had been busy overnight.

The day was overcast and grey and rain was a feature for much of the morning and into the afternoon. By 4pm, it cleared a bit and dog made his usual suggestions about a walk by staring at his lead and uttering a whine or two. So off we went.

The fresh air lifted our spirits enough to complete a circuit of the farmland and back. A route that dog likes, lots of smells - rabbit, squirrel, pheasant et al. As we passed the picnic area I let him run free as no one else was about. He chased a few shadows and some errant leaves that blew in the wind and enjoyed the freedom for a while. Then he came and sat beside me panting as dogs often do. I had a water-bottle in my camera bag and he slurped at the refreshment.

With collar and lead reattached we headed homeward.

The bit of forest immediately outside the back is a longish triangle with the house situated at the broad end. The pointy end is where we cross the side road. We do this going out and coming back. Having got onto our triangluar bit I was ready to let dog off the lead again; He knows the way home from there and he does like to run about in the leaf litter. Looking back, it is as well that I didn't let him loose. Halfway along the track the first boar appeared. - A mother with two humbugs. (Humbug is the term for the stripey babies; They look like the sweets that have the same name.)

We stopped and I grabbed the camera. It was a hasty shot which accounts for the blurr. We backed up. The mother looked at us and ushered the little ones onward across the track. I thought it best to go around behind them and seek the lower path. It proved to be the wrong way. A family (a Sounder is the technical term), milled about across the possible routes to home and we had no choice but to retreat and seek the 'safe' way by the grassy roadside. 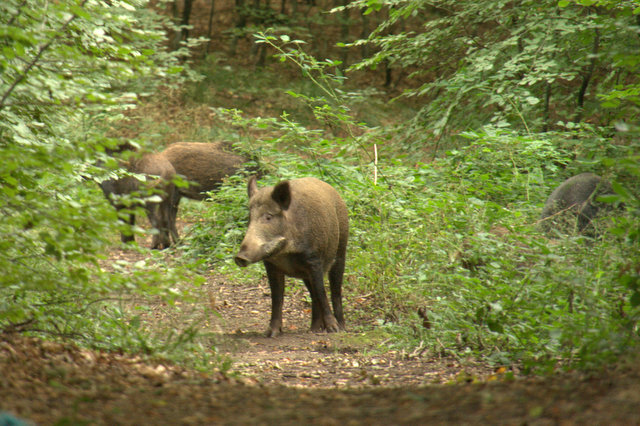 I did not feel threatened by the wild animals. Neither did I feel the need to frighten them off. I was happy to see them doing what they do - going their way and enjoying their day. 'Tis a shame that Government, 130 miles away in the deepest part of London, find it necessary to cull (kill) these creatures. I wonder how many have actually seen the animals in their natural habitat and have had an encounter with Nature? 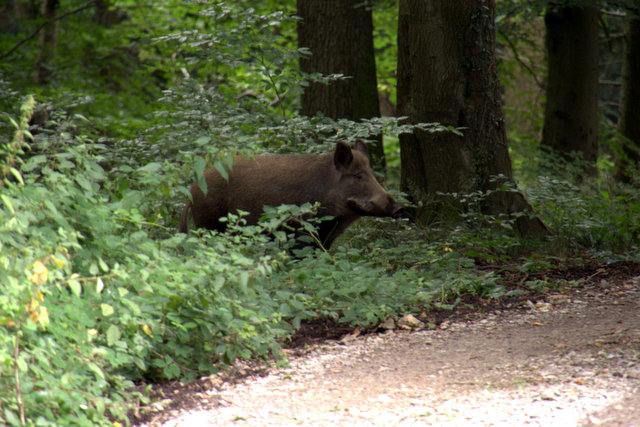 A good day. Both dog and I enjoyed it.

You were able to get some pretty good shots of the boars. That's pretty cool.

They have always scared me because I have heard and read where they can be violent and kill a person.

What great photos to capture. We have wild boars up in our provincial park. They aren't native to the area, and have multiplied quickly in the last few years. The park brought in cougars to try and get them under control. I haven't come across any while hiking but they do have warning signs as they've been known to get aggressive.

You are lucky to had seen them in their natural habitat. I had seen one in my uncle's pen; they captured it. Too bad, many people are killing and eating it. They would become extinct soon.

No record of anyone being hurt by them here. LeaPea2417

I would be more worried by the cougars. The big-cats are far more dangerous LynnWrites .

They do make for good sauages!
I am happy to see them roam free in their natural habitat acelawrites .